The eighth game of the “one microRPG game a month” (OMGAM) challenge. This one’s a modern game; my design intent was to explore ways to create a mystery on the fly that was satisfying from a narrative perspective and that surprised me.

To that end, I chose AW-style resolution, since it’s very effective at push-pulling through an adventure, paired with a simple traits-based character and, instead of stats, questions to answer like “do I have the advantage?” and “do I have any useful abilities?”.

Then I merged in some third-hand (meaning I read about someone’s experiences with it on the internet) elements from Gumshoe to provide a suprisingly robust but freeform scene-based structure; as you play, you get a free critical clue each scene that directs you to the next scene. It’s up to you what ability triggers the clue (and thus what form it takes) and how you interpret the randomly rolled result.

And finally, it borrows the idea of a fifteen box “track” from Otherkind, applying it to luck and to a supernatural creature type. As you play, you mark and unmark your tracks based on events in the fiction, and when you hit a breakpoint, that event happens.

In play, it’s punchy and quick, almost breezy, and feels very much like a novel or movie, with plenty of world and character “push” to keep things moving. 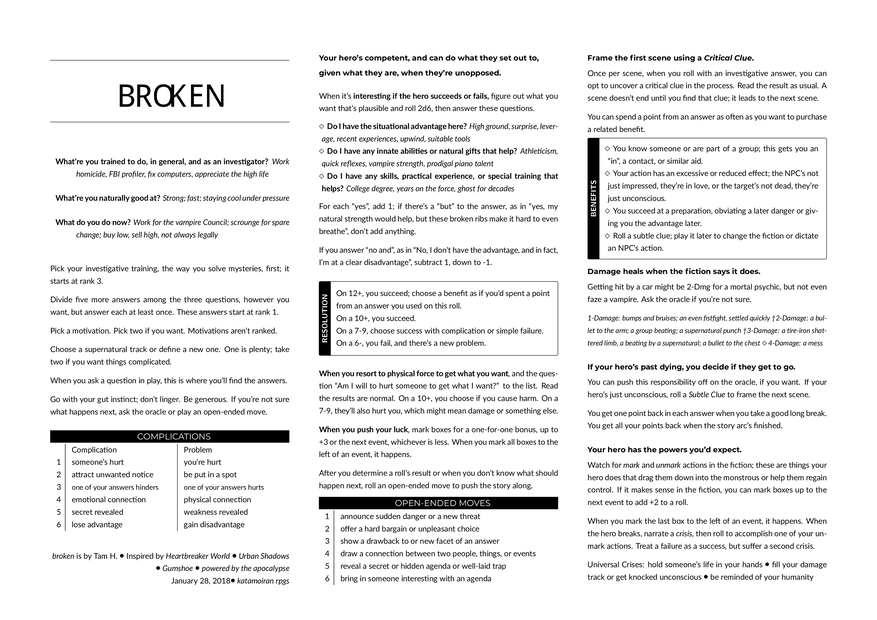